European stocks rallies and the euro come under pressure after the European Central Bank (ECB) extends the bond-buying scheme but at a reduced volume.
ECB extends the length of time that its stimulus program runs.
Its purchases will fall to 30 billion euros ($35 billion) from 60 billion euros, starting in January. The central bank said it will extend its monetary stimulus program until at least September of next year.
The central bank has remained ultra-accommodative in the years since the global financial crash and the euro zone sovereign debt crises.
As well as record low interest rates it also introduced U.S.-style quantitative easing (QE) - buying assets to stimulate lending - which is used to boost the economy.
The monetary policy will adapt to the new environment
The central bank noted that if financial conditions or the economic outlook change, its monetary policy will adapt to the new environment. ECB President Mario Draghi said the bank would continue to reinvest the proceeds it gets from buying debt in a "massive" way.
ECB President explained that this recalibration of asset purchases reflected growing confidence in reaching the bank's inflation target. 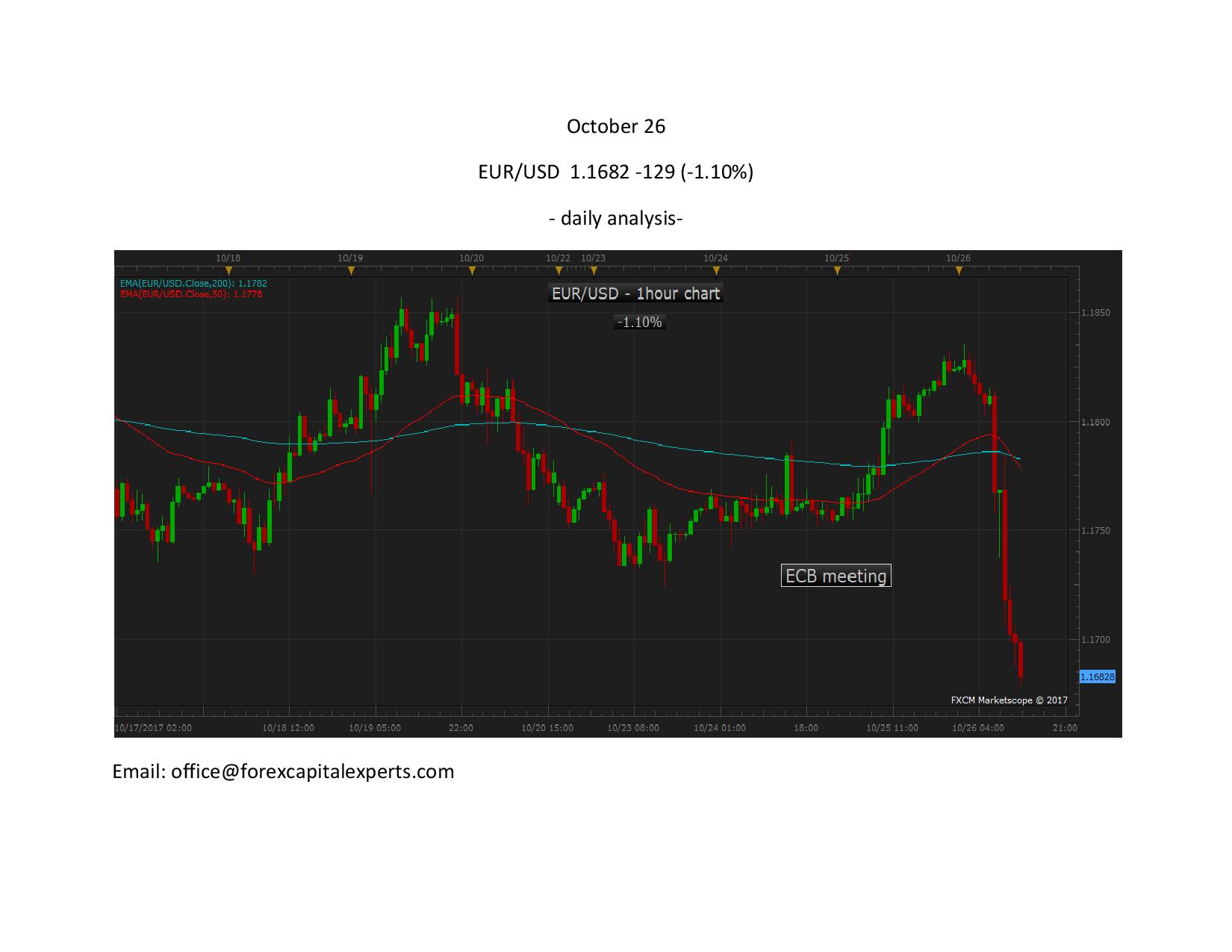 RBA will leave interest rates on hold at its next meeting?

Australian consumer prices were surprisingly tame last quarter while core inflation stayed below target for almost a second full year. Investors pare back the already slim chance of a rate hike for next months.

Underlying inflation averaged around 1.85 percent, actually a touch slower than in the second quarter. Core inflation has now undershot the Reserve Bank of Australia’s (RBA) long-term target band of 2 percent to 3 percent for seven straight quarters.

“Consumer prices are amazingly benign across the economy,” according to Matt Sherwood, Sydney-based head of investment strategy for fund manager Perpetual Investments.

The reason is that “wages growth is at an all-time low, and households are saving more to pay down their debt”. “It tells me that the RBA is on hold not only in 2017 but also all of 2018”, added Matt Sherwood. 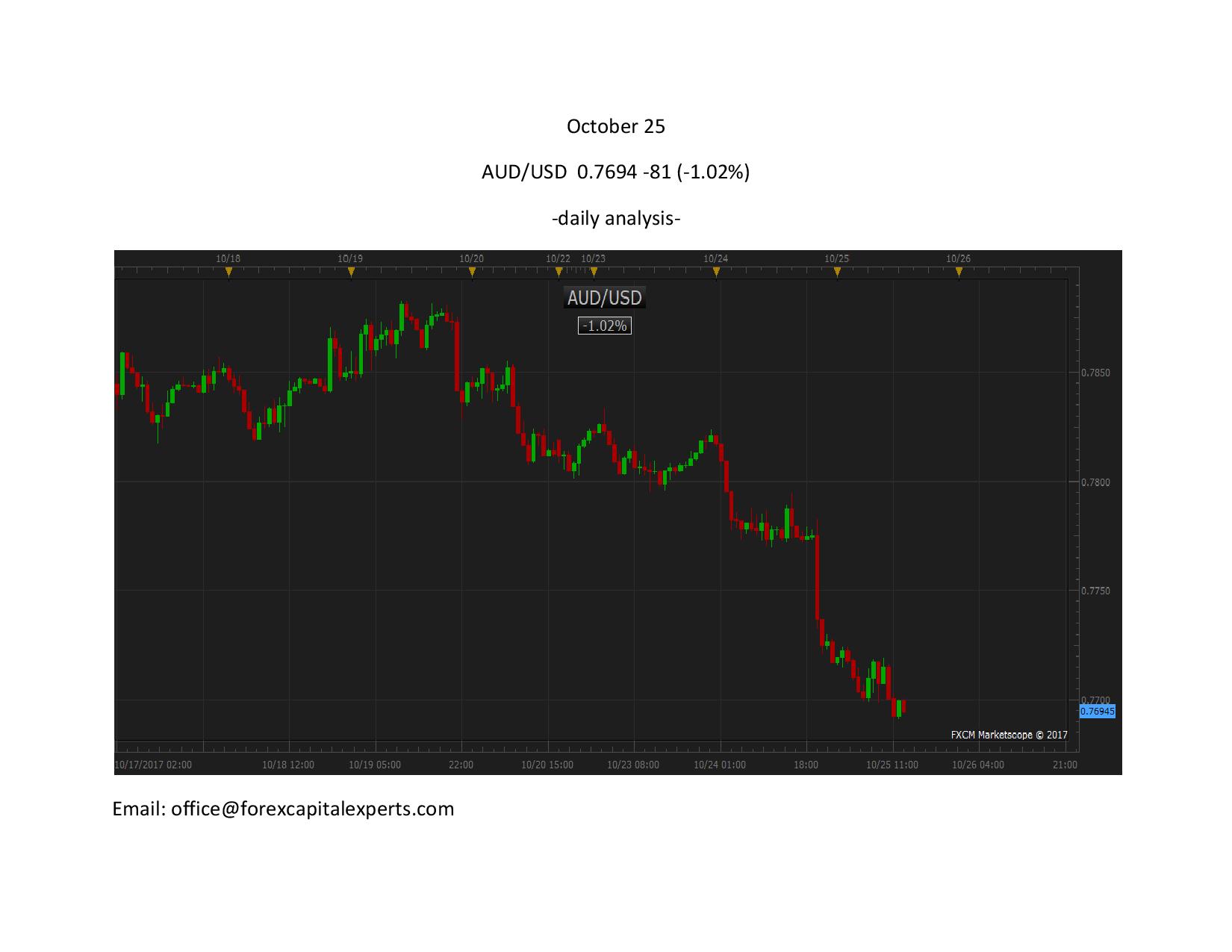 Will Bank of Canada hold the rate steady at 1 per cent until 2018?

An unexpected decline in retail sales and scant evidence of inflation pressure will give the Bank of Canada little reason to press ahead with a third-straight rate increase next week.
Statistics Canada reported Friday retail sales declined 0.3 percent in August, versus a median forecast of a 0.5 percent gain.
The two indicators are the last of any significance before the Bank of Canada’s Oct. 25 rate decision, and suggest no urgency for Governor Stephen Poloz to increase borrowing costs again after two hikes since July. The Canadian dollar fell 0.6 percent to C$1.2558 after the report. Odds of a rate increase next week fell to about 19 percent, from 21 percent yesterday, swaps trading suggests.
The retail sales number was the big disappointment, and reinforces expectations the nation’s economy is heading for a slowdown after strong growth earlier this year. Monthly retail sales are little changed since touching a 2017 high in May. In volume terms, sales fell 0.7 percent in August, the biggest decline since March 2016.
Motor vehicle sales were one sector of strength, and the total number also got a boost from higher gasoline prices. But excluding those two sectors, sales were down 1.3 percent.
The Bank of Canada’s next interest-rate decision is Oct. 25, during which the Monetary Policy Report containing economic projections is also expected to be released, and Mr. Poloz will follow with a news conference. Most of the economists surveyed by Bloomberg expect the bank to keep the overnight lending rate unchanged at 1 per cent. 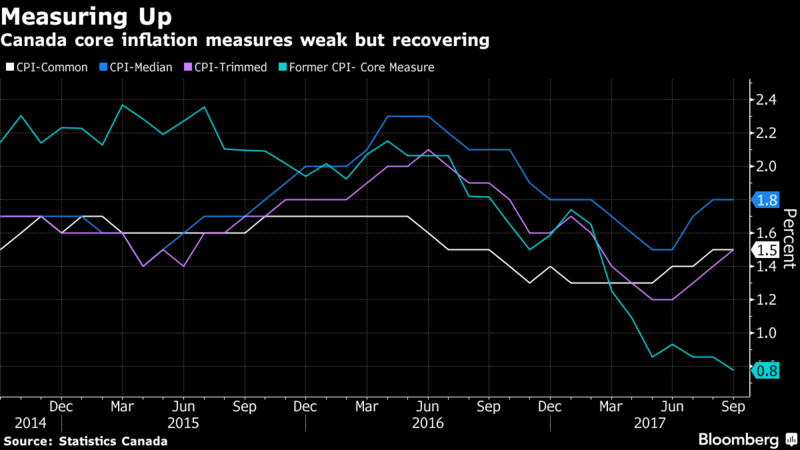 NZD down 1.7 percent to its lowest levels in four and half months

New Zealand has its youngest prime minister in more than 150 years, after the nationalist New Zealand First Party agreed to form a new government with Labour Party leader Jacinda Ardern (37 years), ending the National Party’s decade in power. The announcement of the new government drove the New Zealand dollar down around 1.7 percent to its lowest levels in four and half months, as markets worried about more protectionist policies.

Markets are concerned about uncertainty
Record net migration of more than 70,000 annually has fuelled demand for housing in New Zealand, far outstripping supply and pushing house prices prohibitively higher, pricing ordinary New Zealanders out of the housing market.
More restrictive trade and foreign ownership could also hurt New Zealand’s reputation as an open economy and antagonize the likes of China, a key trading partner.
Trade between the two countries has grown to more than NZ$20 billion ($14.4 billion) a year and Chinese President Xi Jinping called the relationship “unprecedented” in its depth. 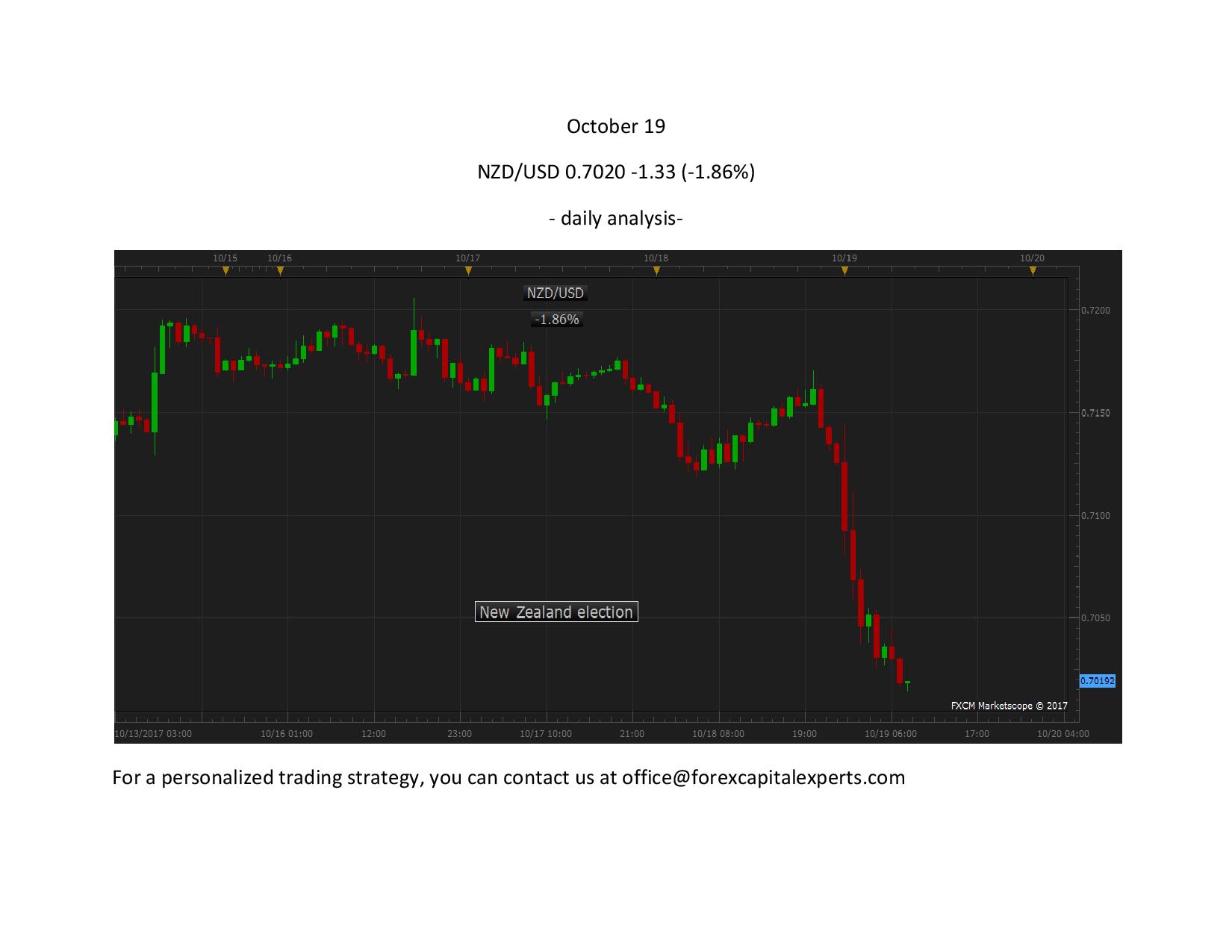 Is New Zealand heading for recession?

Business confidence in New Zealand weakened to the lowest level in two years in September amid political uncertainty, according to the latest survey, taken in early September, from ANZ Bank.
The business confidence index plunged to 0.0 in September from 18.3 in August. Moreover, this was the lowest level since September 2015.
Among components, activity, employment and investment expectations all remained at healthy levels, though peaks had pared back.
According to Cameron Bagrie, chief economist at ANZ Bank,"some of the paring back may reflect a maturing business expansion, but we're more inclined to put the move down to political uncertainty". Activity outlook also dropped to 29.6 this month from 18.3 in the preceding month. 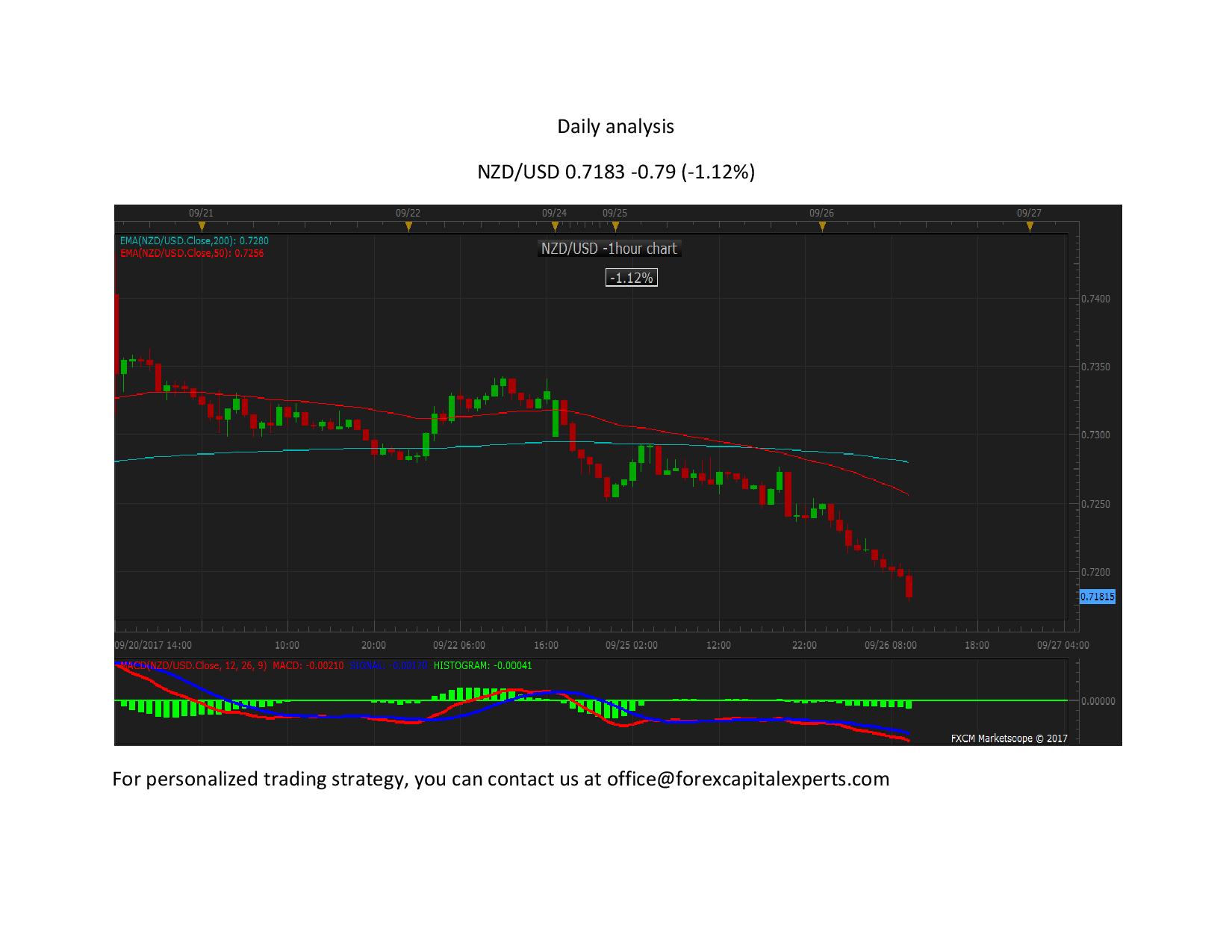 Will the next RBA move cause a drop in interest rates?

Australia’s central bank sees a good chance that global growth continues on its current path.The global economy in Australia is looking better than it did a year ago, according to Luci Ellis, Reserve Bank of Australia’s (RBA) assistant governor for economics.

Rising political tensions, especially in Asia, and record levels of household debt at home pose risks to the central bank’s outlook. The RBA has long warned that too many home owners are over-burdened with debt, though Ellis said this is probably best regarded as a potential exacerbating factor.“If some other shock should come along, debt would make it worse,” she said. While global wage growth and inflation should pick up as the forces of supply and demand assert themselves, that “could take a while," Ellis said. If price pressures remain subdued despite reasonable growth, then policymakers face a challenge. "In that scenario, policy needs to remain appropriately expansionary while avoiding further build-up of leverage and financial risk," Ellis added.

Ellis suggested there was potential for productivity growth to pick up once spare capacity in the world’s leading economies has been fully absorbed.Australia’s central bank expects to see solid employment growth ahead as the economy gradually picks up, while noting risks from housing debt outpacing household income. Interest rates were left unchanged, the Reserve Bank of Australia gave no signal policy was set to change any time soon.

Policy makers are also enjoying a boost from government infrastructure spending as residential housing appears to have peaked. But they’d be somewhat perplexed by markets bringing forward the chance of a rate move to about 60 percent in June 2018, driven by a generally stronger developed world outlook. 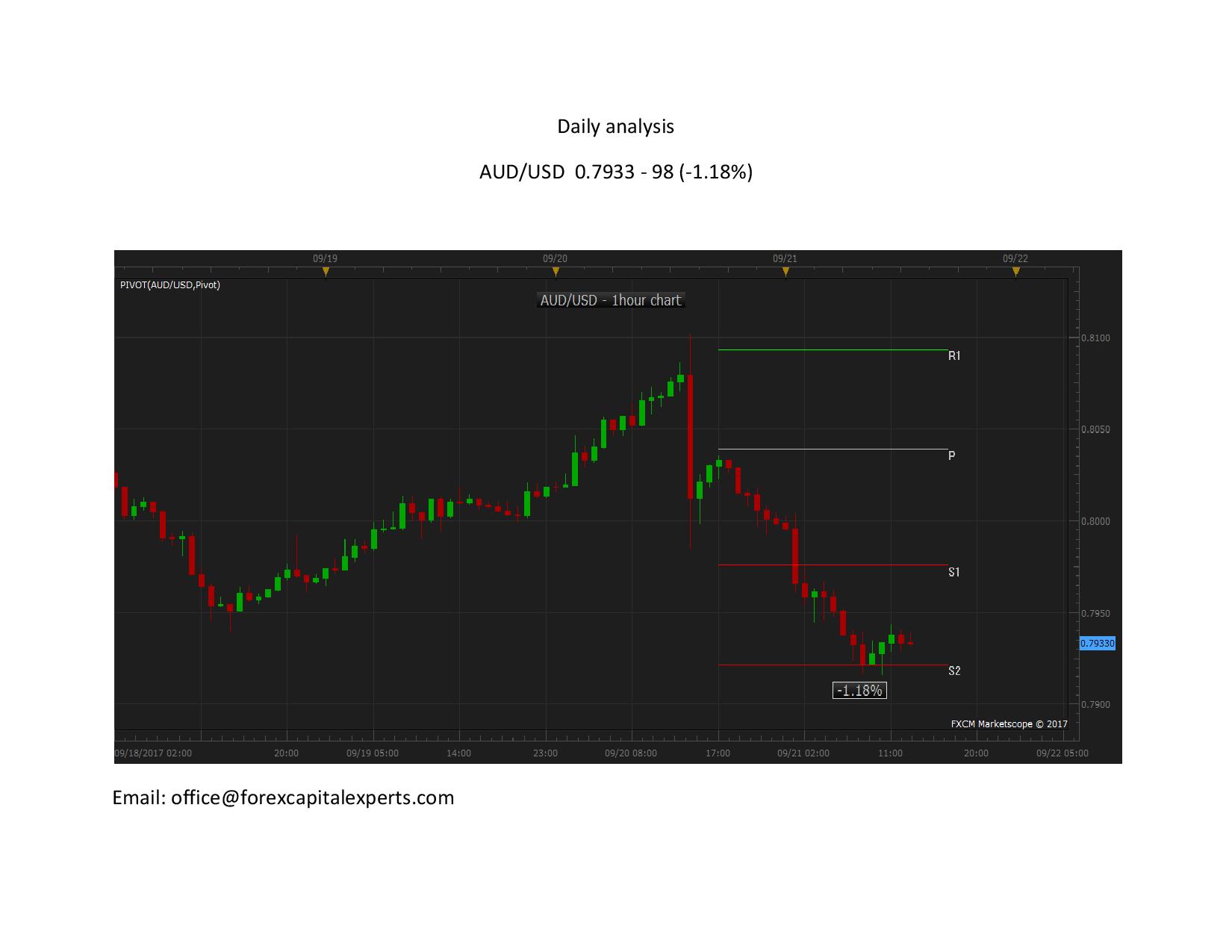 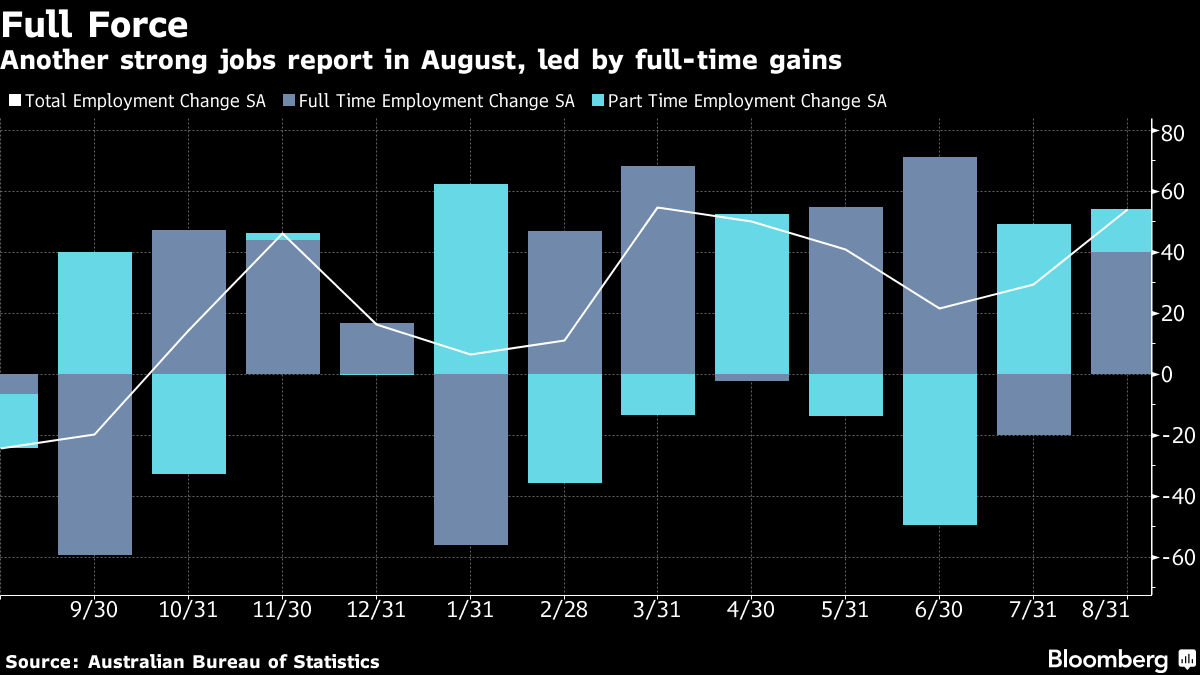 European markets were trading sharply lower today because of geopolitical concerns regarding North Korea. Japan's Prime Minister Shinzo Abe told reporters that a ballistic missile that was fired by North Korea had passed over Japan. Abe has since stated that the missile posed a grave threat to Japan, and that he would ask the United Nations to ramp up the pressure on Pyongyang. The group renewed sanctions against North Korea in early August. Since then the exchange of words and actions between North Korea and the U.S. deteriorated.
As a result, investors worldwide turn to safe-haven assets. According to GfK, German consumer confidence is set to reach a near-16 year high in September. The survey of around 2,000 Germans rose to 10.9 going into September, marking the fifth consecutive monthly increase. 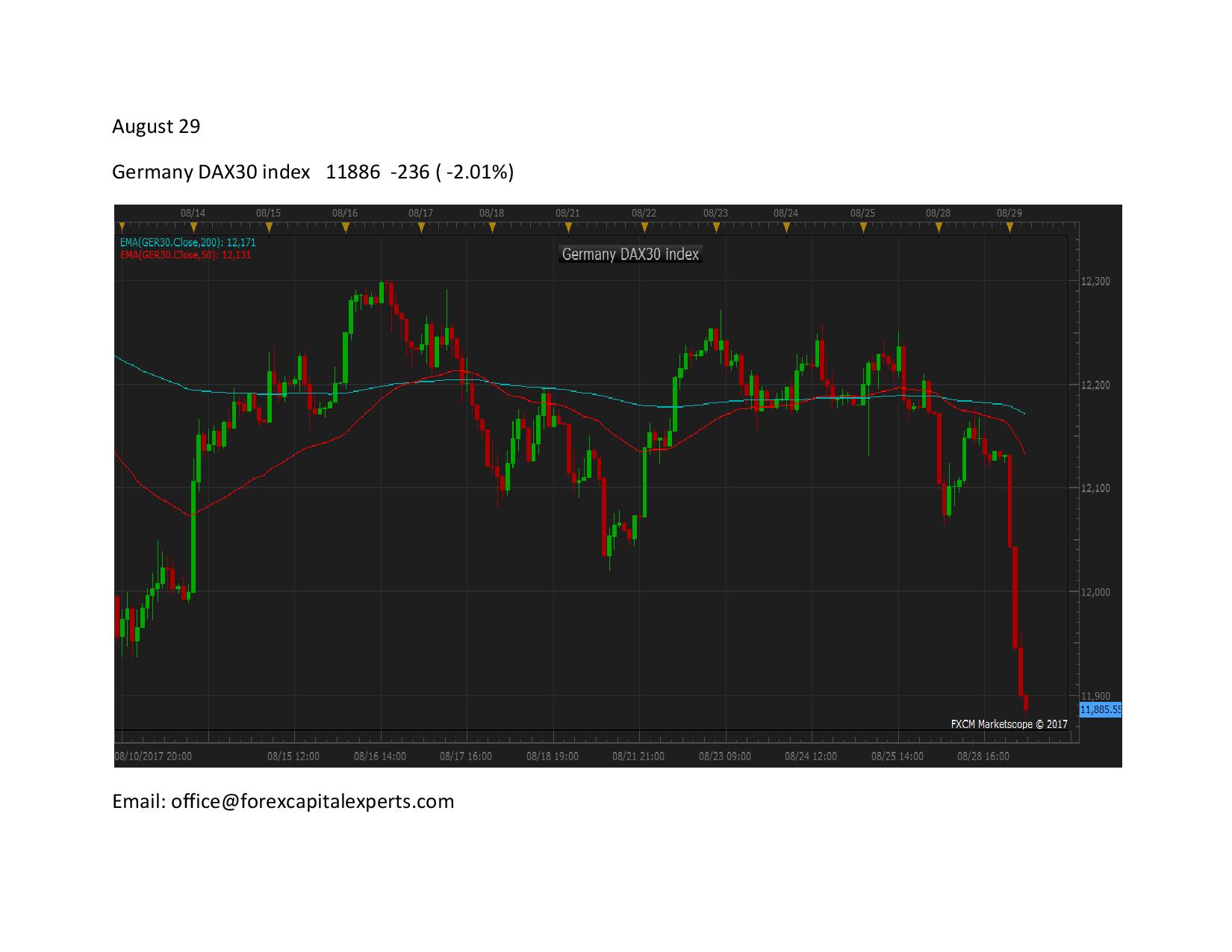 NZD fell after the Treasury lowered its growth estimate

The New Zealand government more than doubled its budget surplus forecast this year but cut growth, flagging that the country's next government will have less spare cash. The Treasury raised its budget surplus forecast for 2016/17 to NZ$3.706 billion ($2.3 billion), boosted by a spike in corporate tax revenues, well above the NZ$1.62 billion surplus it forecast in May. It reduced its economic growth calculation for the year to June to 2.6 percent from 3.2 percent previously, and cut its growth projection to 3.5 percent in the year to June 2018 from 3.7 percent in the May budget update.
This announcement comes a month before New Zealand goes to the polls on Sept. 23 to elect a new government. Labour Party has surged in the polls since 37-year-old Jacinda Ardern took the party leadership in a gamble aimed at energizing its campaign to unseat Prime Minister Bill English and his National Party-led coalition.
"Those looking for Treasury to announce that there was money to burn ... will be very disappointed," according to a note of BNZ Head of Research Stephen Toplis."There were many who had assumed that the recent windfall gains that were flowing into tax revenues would provide the base for a much stronger future revenue track: They didn't." 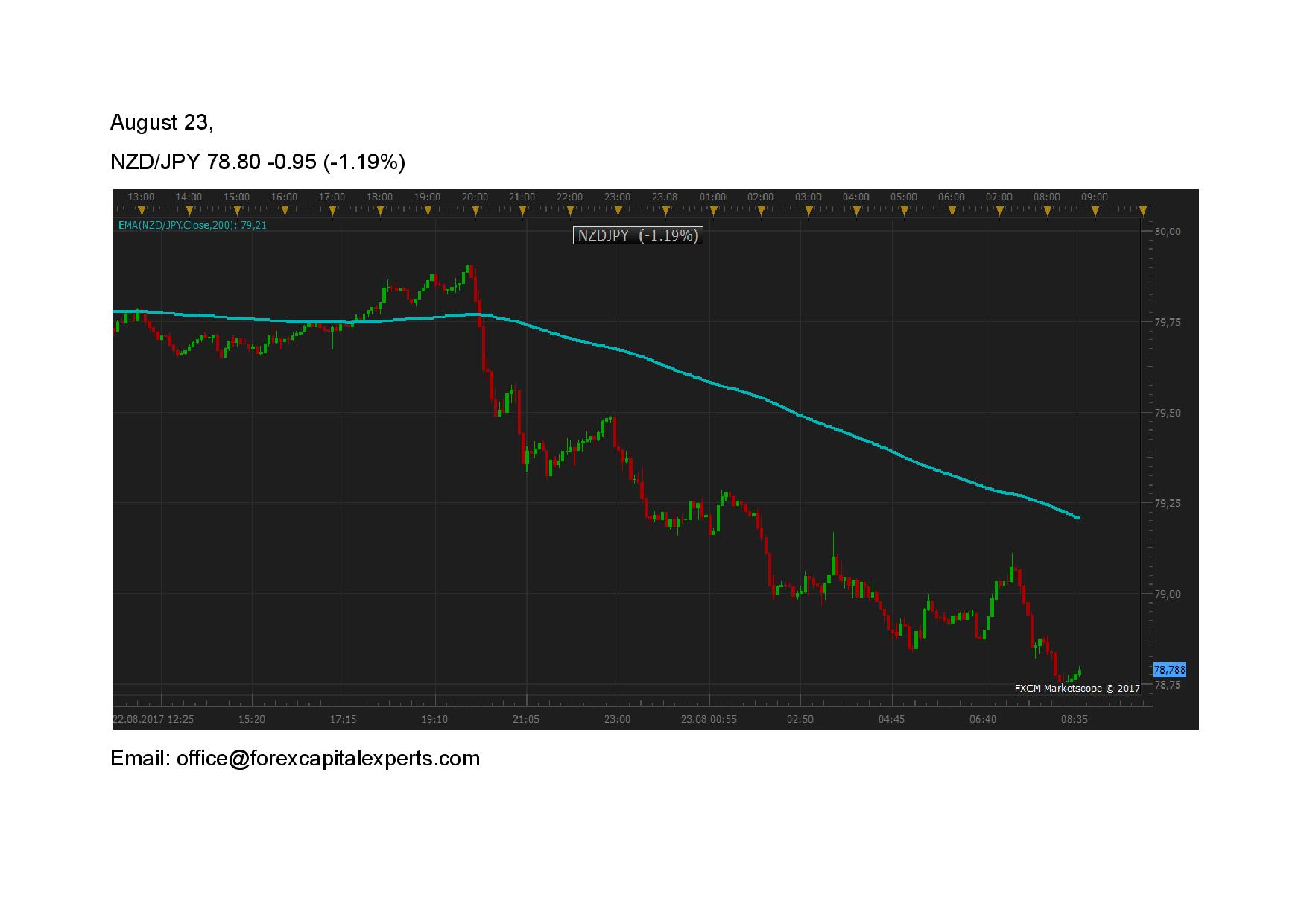 What causes the stock market crash?

Stocks fell today, while Treasuries rose with the yen as investors sought havens. Gold jumped, after Donald Trump exacerbated the controversy sparked by a racist rally in Virginia and terrorists struck a crowded street in Barcelona.Donald Trump disbanded two advisory councils staffed by CEOs. He also slammed Republican members of Congress who were critical of his remarks on race.

In economic news, weekly jobless claims fell to a seasonally adjusted 232,000 from 244,000. Meanwhile, U.S. factory output slipped in July as auto production fell off. Technology shares were also suffering the worst of the beating following disappointing results Cisco Systems Inc. The Dow Jones Industrial Average dropped 220 points or 0.95% to 21,805, as Cisco declined 4.6% after the networking-equipment company late Wednesday reported earnings that missed forecasts and predicted a drop in revenue next quarter, and Wal-Mart Stores Inc fell 2.2% after its results, which included lower-than-expected sales from its Sam’s Club division. 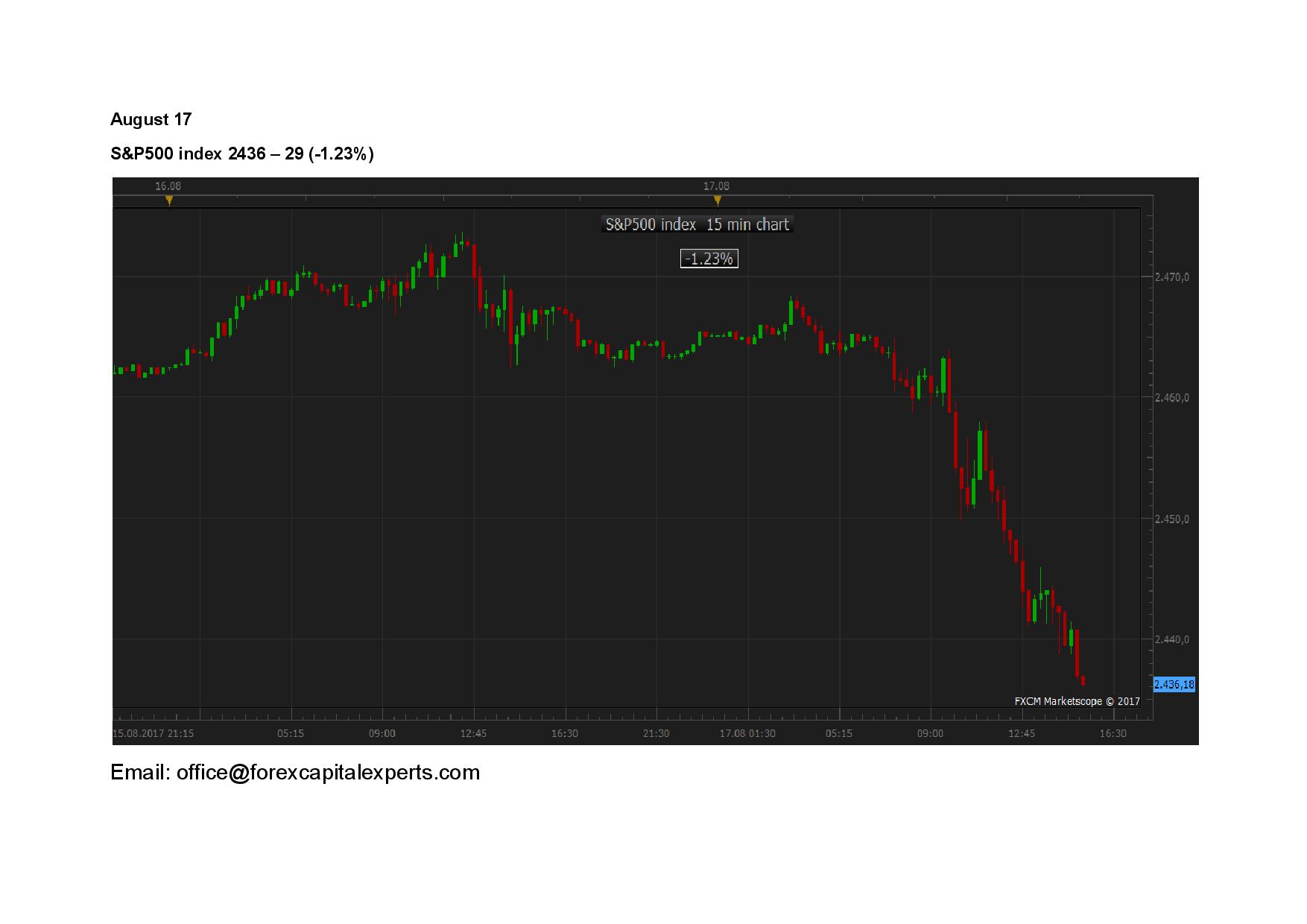 The Reserve Bank of New Zealand (RBNZ) held interest rates at a record low and said it doesn’t expect to raise them for two years amid weak inflation. “Monetary policy will remain accommodative for a considerable period,” Reserve Bank Governor Graeme Wheeler said in a statement after keeping the official cash rate at 1.75 percent. The bank lowered its projections for inflation.
“A lower New Zealand dollar is needed to increase tradables inflation and help deliver more balanced growth,” Wheeler said. The central bank maintained its forecast that rates won’t rise until the third quarter of 2019. The kiwi has climbed more than 7 percent against the greenback since the RBNZ’s last set of forecasts on May 11.
ASB Bank economists said the mild surprise in today’s release was that the central bank didn’t push out its forecast policy tightening due to a weaker inflation outlook. While New Zealand’s economy has been expanding over the past several years, supported by immigration and booming tourism and construction, growth fell short of expectations in the fourth quarter of 2016 and the first quarter of 2017. Employment declined in the second quarter as firms became more cautious and wage inflation remains subdued. 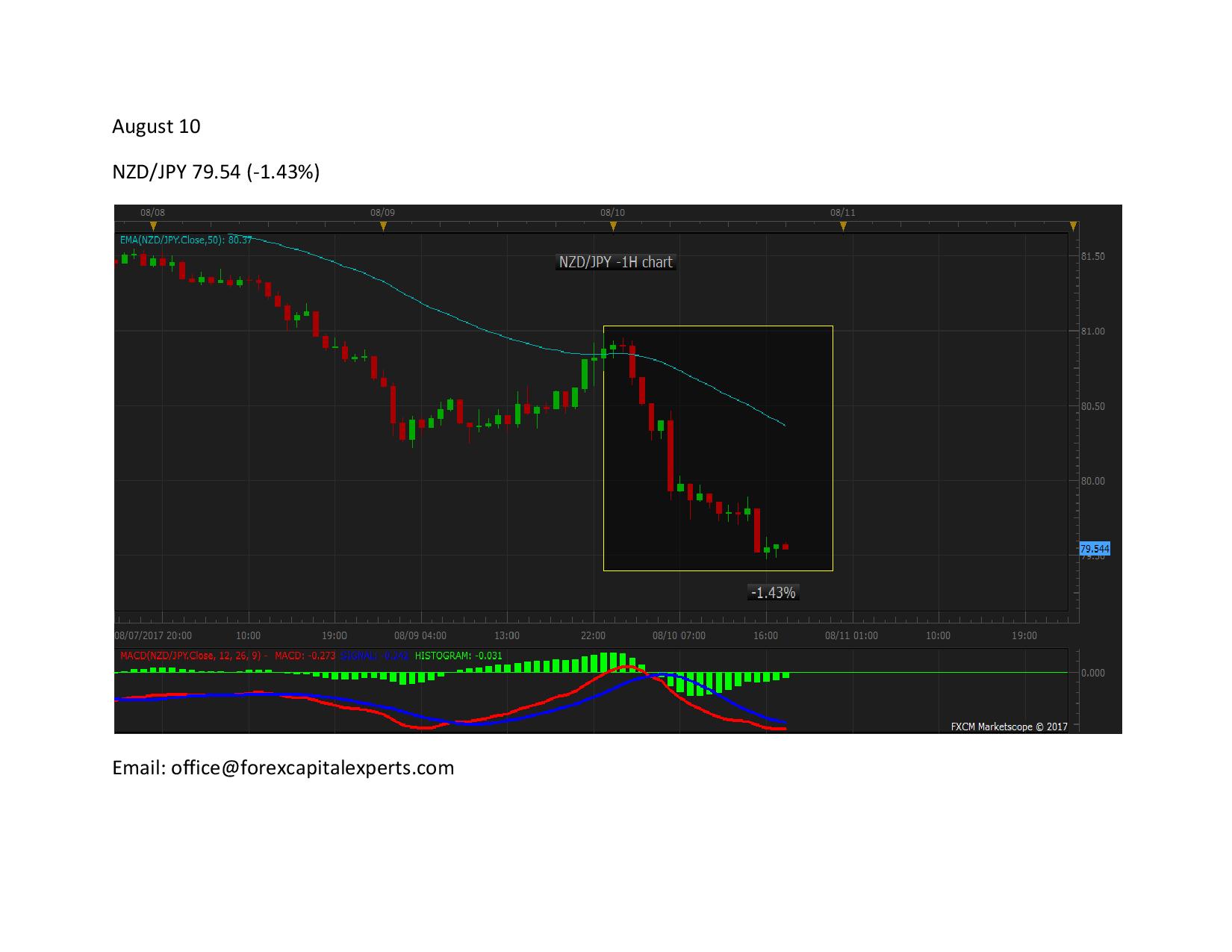