Will Donald Trump be impeached?

The dollar fell to its lowest level against the yen since May 1. The currency sank 0.5 percent against the Swiss franc, falling to its lowest since Nov. 9, as talk that U.S. President Donald Trump could face the threat of impeachment boosted safe-haven assets. The greenback fell by as much as 1.35 percent against the yen, blowing through the 112 yen level to 111.57 yen.
Today's price action showed traders were losing faith in Trump's ability to push through his campaign trail promises of tax reform and fiscal stimulus. However, there was limited expectation that he would realistically face impeachment. Many financial analysts said the market was losing some faith in the likelihood of the FED raising U.S. overnight interest rates at its meeting next month. Higher rates make a country's currency more attractive to investors. 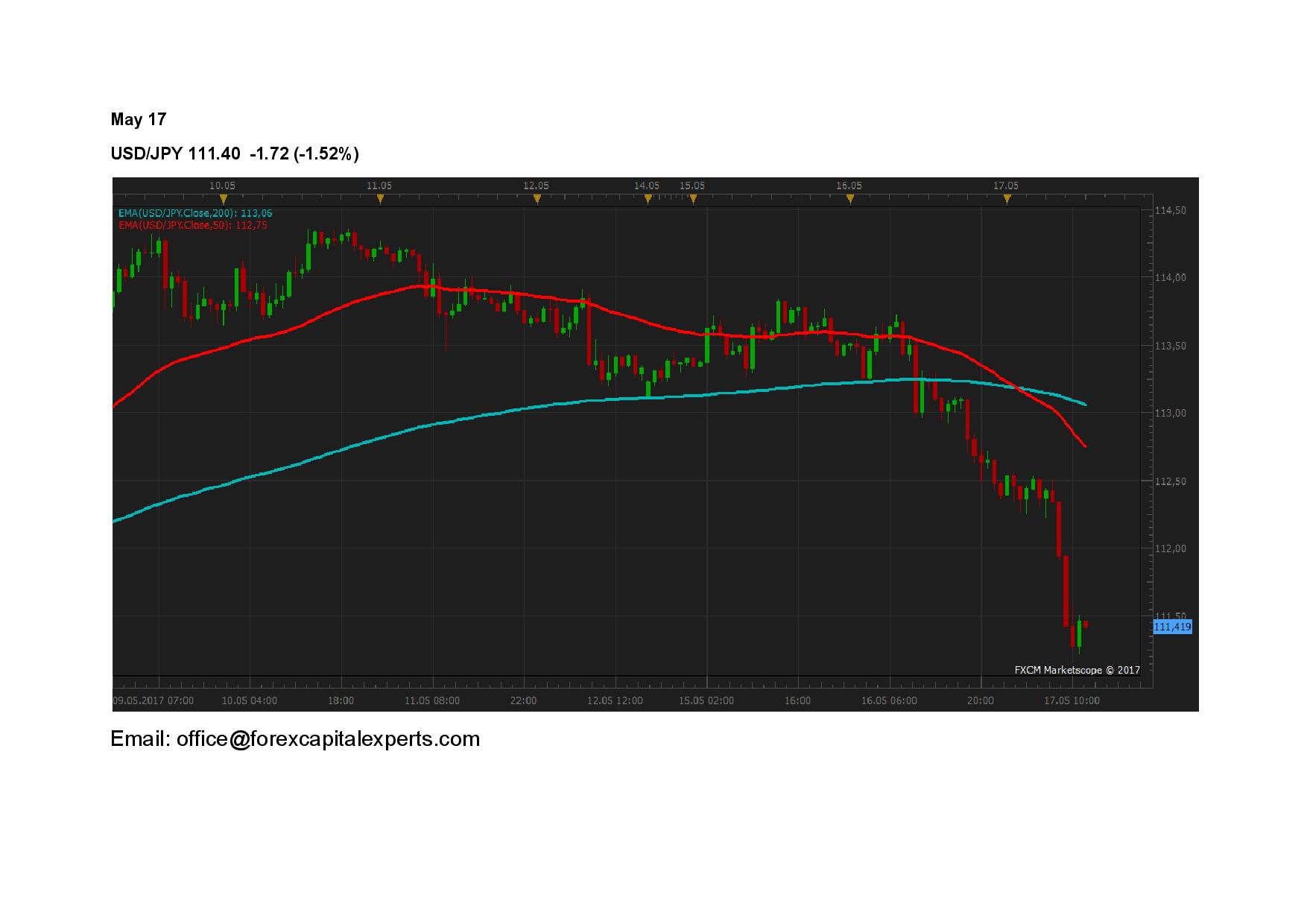 Kiwi tumbled to an 11-month low, after the RBNZ held rates unchanged

The New Zealand Dollar depreciated against its major counterparts after the Reserve Bank of New Zealand (RBNZ) held rates unchanged in May as expected. The RBNZ defied market expectations at its policy meeting on Thursday, sending the country's currency to an 11-month low.

Inflation accelerated to 2.2 percent in the quarter, well above the RBNZ's projection of 1.5 percent. The first time since 2011 inflation had reached the midpoint of the central bank's target range. The bank's consumer price index forecasts show inflation falling back to the bottom of the 1-3 percent target band next year.

The RBNZ said that monetary policy will remain accommodative for a considerable period. The RBNZ forecasts that the average official cash rate will rise in the third quarter of 2019, but the markets were seeing this happening earlier. 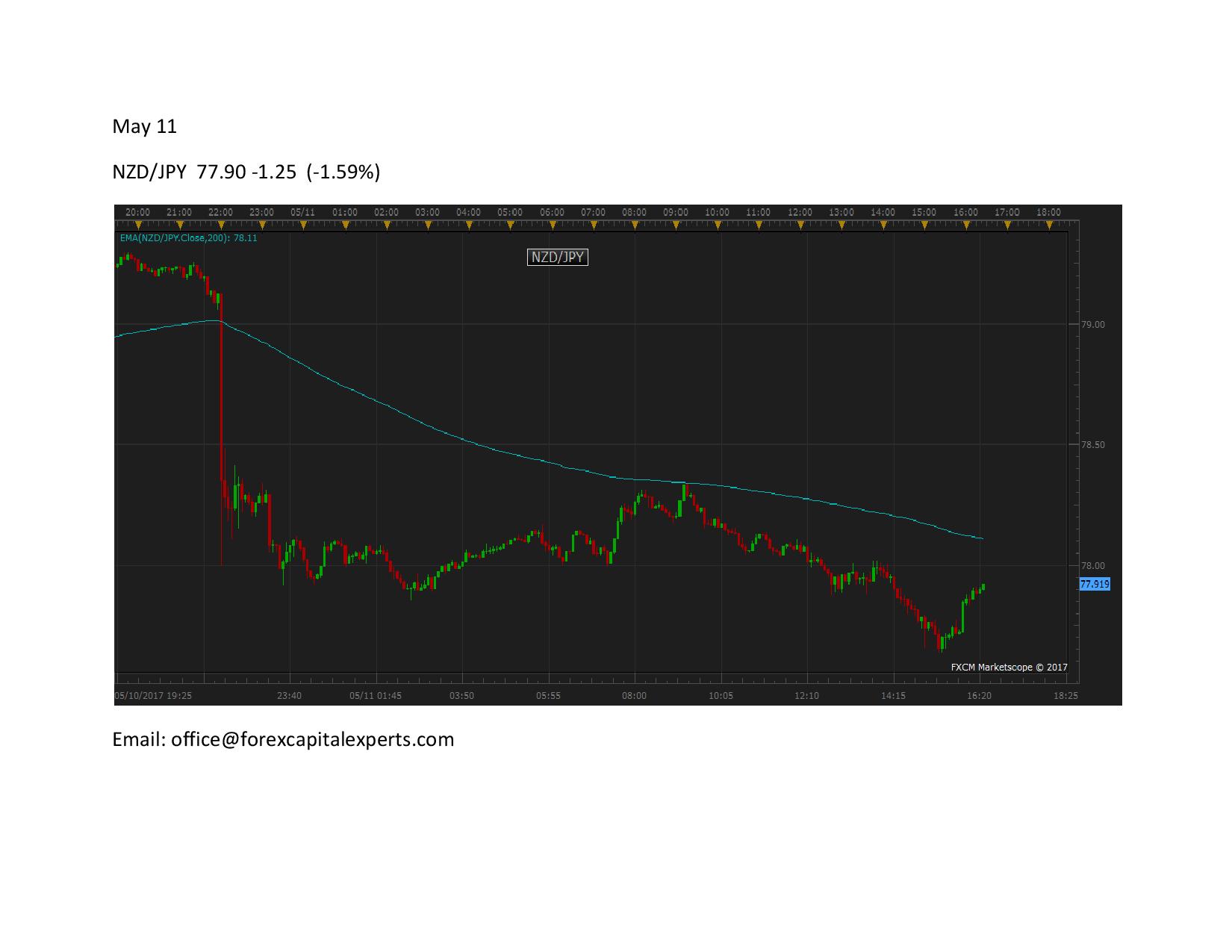 According to Energy Information Administration, U.S. commercial crude inventories fell by 5.2 million barrels to a total of 522.5 in the week through May 5.

U.S. gasoline futures were up 3.3 percent

Gasoline demand, which has been soft in recent weeks, also rebounded strongly. U.S. gasoline futures were up 3.3 percent after the report. EIA reported gasoline stocks fell by 150,000 barrels, compared with analysts' expectations in a Reuters poll for a 538,000 barrel-drop. API had reported a build in U.S. gasoline stockpiles on Tuesday.Distillate stockpiles, which include diesel and heating oil, fell by 1.6 million barrels, versus expectations for a 1 million-barrel decline, the EIA data showed.

Saudi Arabia's energy minister, Khalid al-Falih, said on Monday he expected OPEC to agree to extend an agreement to limit oil production to the end of the year or possibly longer.State-owned Saudi Aramco will reduce oil supplies to Asian customers by about 7 million barrels next month, a source told Reuters, as part of the OPEC ' agreement to reduce production. Some data from tanker tracking firm ClipperData last week showed Saudi crude oil loadings for export fell by about 670,000 barrels a day in April from October. 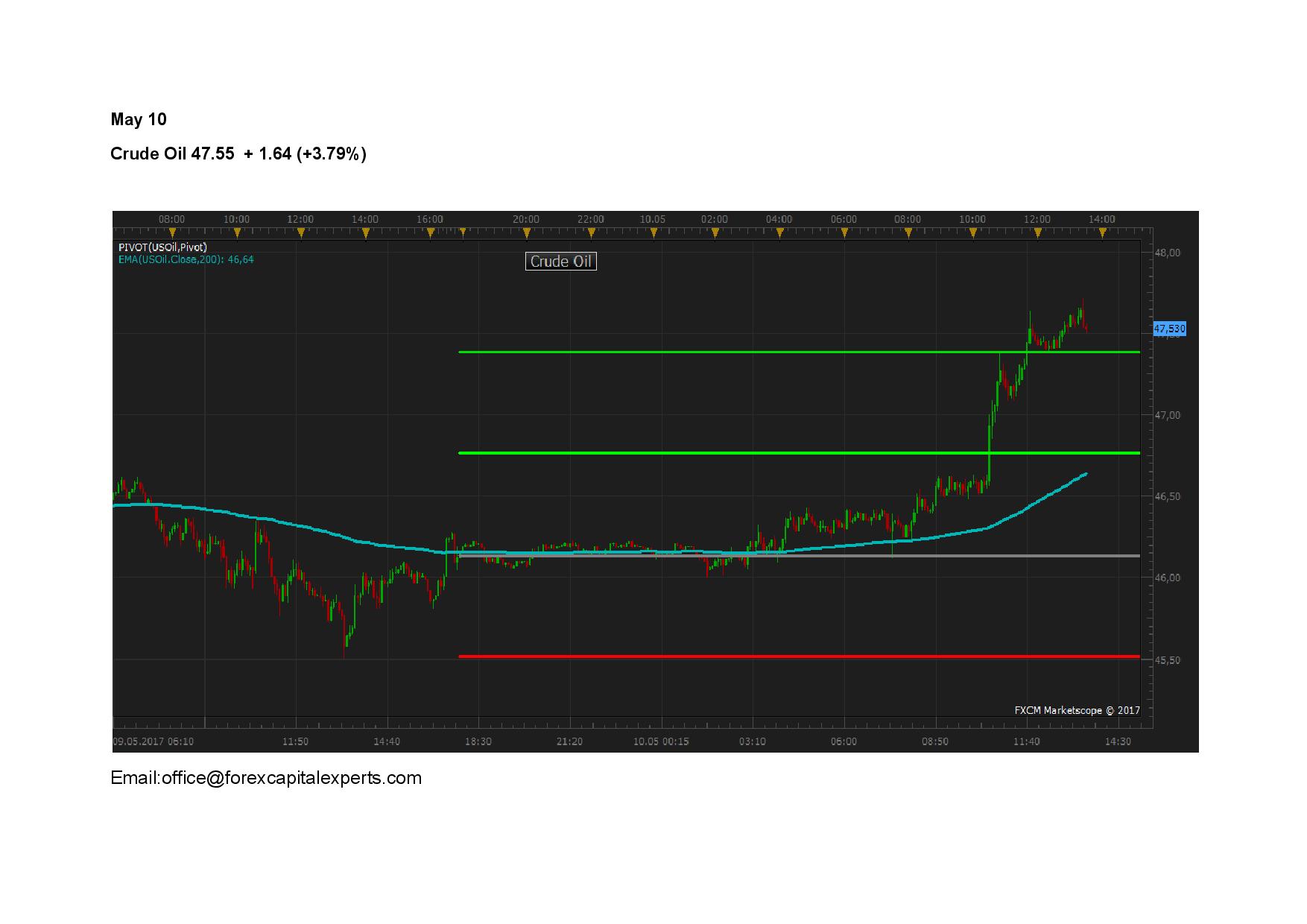 The U.S. dollar rose to nearly two-month highs against the yen on Tuesday. The risk appetite is improved following the French election and investors focused on monetary policy and potential Federal Reserve interest rate hikes.

Chief market analyst at Commonwealth Foreign Exchange in Washington, Omer Esiner, said for Bloomberg that “the U.S. economy saw a marked deceleration in the first quarter, the overall outlook remains solid and the Fed is still widely expected to raise U.S. lending rates in June and likely again in September".

Chinese shares rose after a five-day selloff  brought the Shanghai Composite Index to the lowest level since October. Asian stocks slipped after rallying to a two-year high on Monday. Japan’s Topix retreated from the highest level since December 2015. 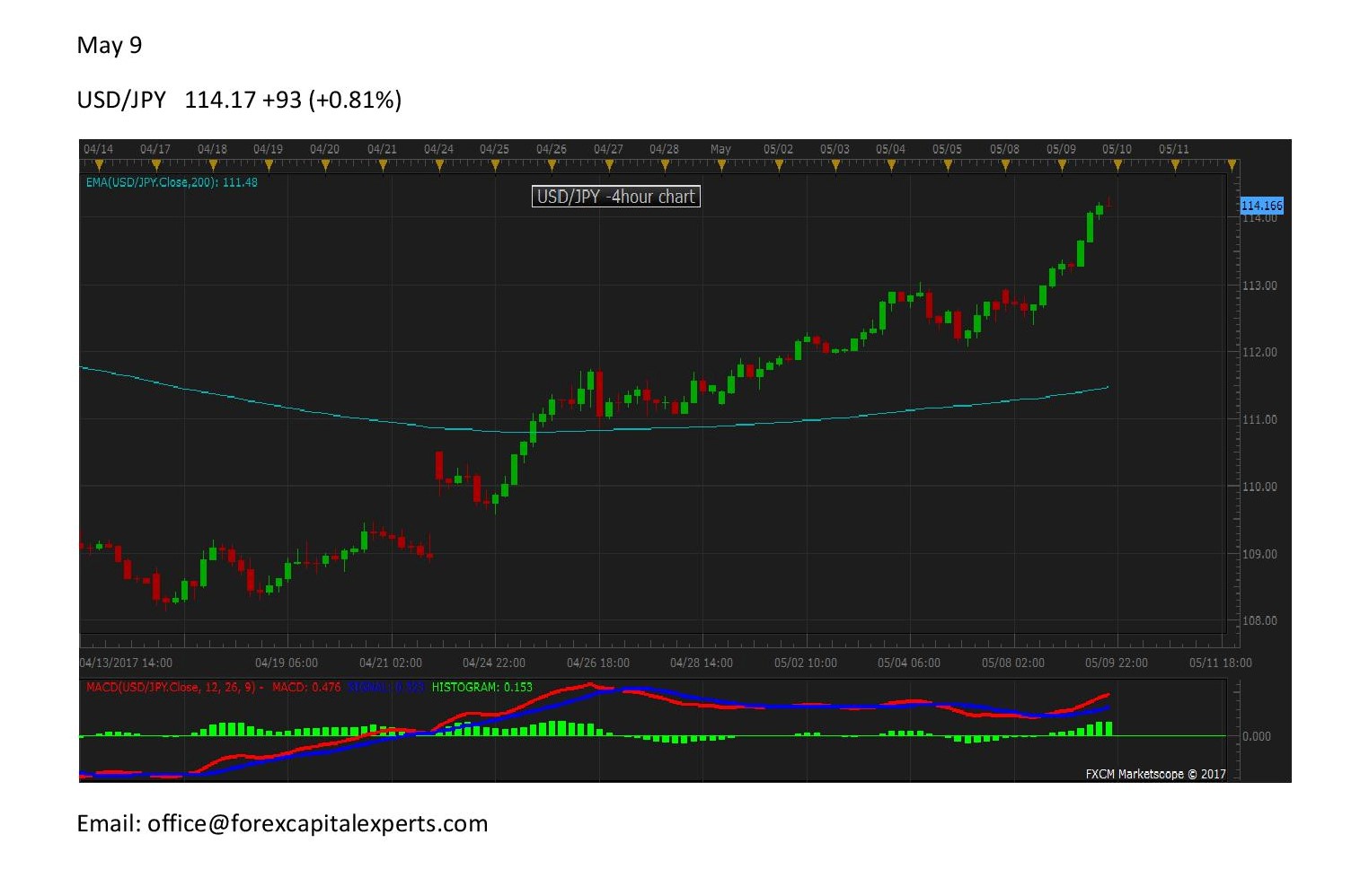 Gold prices fell to six-week lows, under pressure from a strengthening dollar on expectations of further U.S. rate rises. The political uncertainty in Europe is also a reason for this drop. Spot gold was down 0.74 percent to $1,228.81. U.S. gold futures fell 1.52 percent to $1,229.50 an ounce.

A rising U.S. currency makes dollar-denominated commodities more expensive for holders of other currencies, potentially subduing demand for Gold. According to Goldman Sachs, the precious metal may be traded moderately lower.  The 3-month target of the bank is is $1,200/oz. 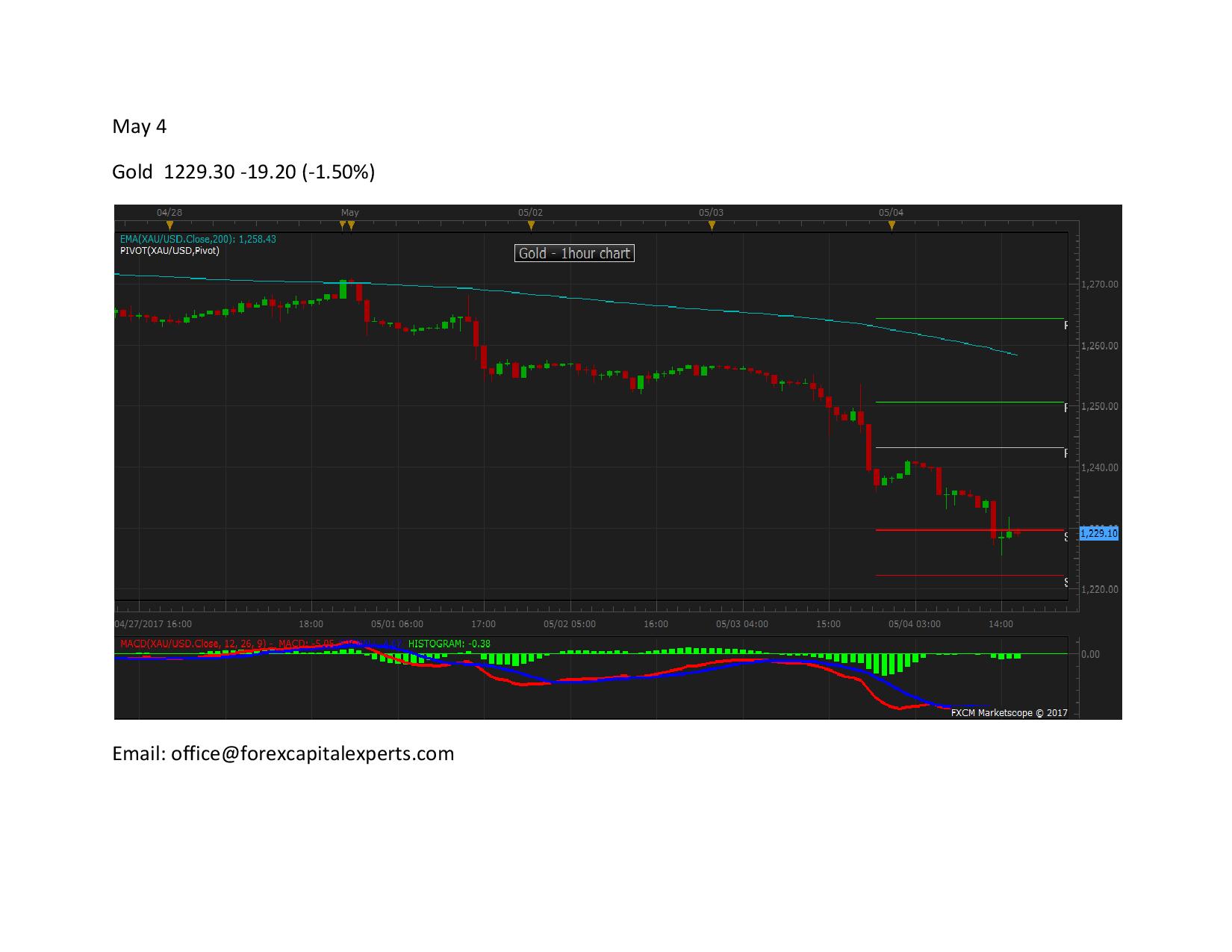 Is Libya the biggest threat to Oil prices?

Oil prices extended losses on Thursday after news that two key oilfields in Libya had restarted, pumping crude for export into an already bloated market.

Libya's Sharara oilfield, with a production capacity of almost 300,000 barrels per day (bpd), has restarted after the end of protests that had blocked pipelines there, according to a Libyan oil source and local official. The same source said El Feel oilfield, with a capacity of about 90,000 bpd, had also restarted.
According to the OPEC Secretary, General Mohammad Barkindo, a global oil overhang was declining. He added that stocks remained high and needed to fall further.
OPEC is discussing extending its cuts into the second half of the year, but the group has a hard task. Oil inventories are near record levels in many parts of the world. 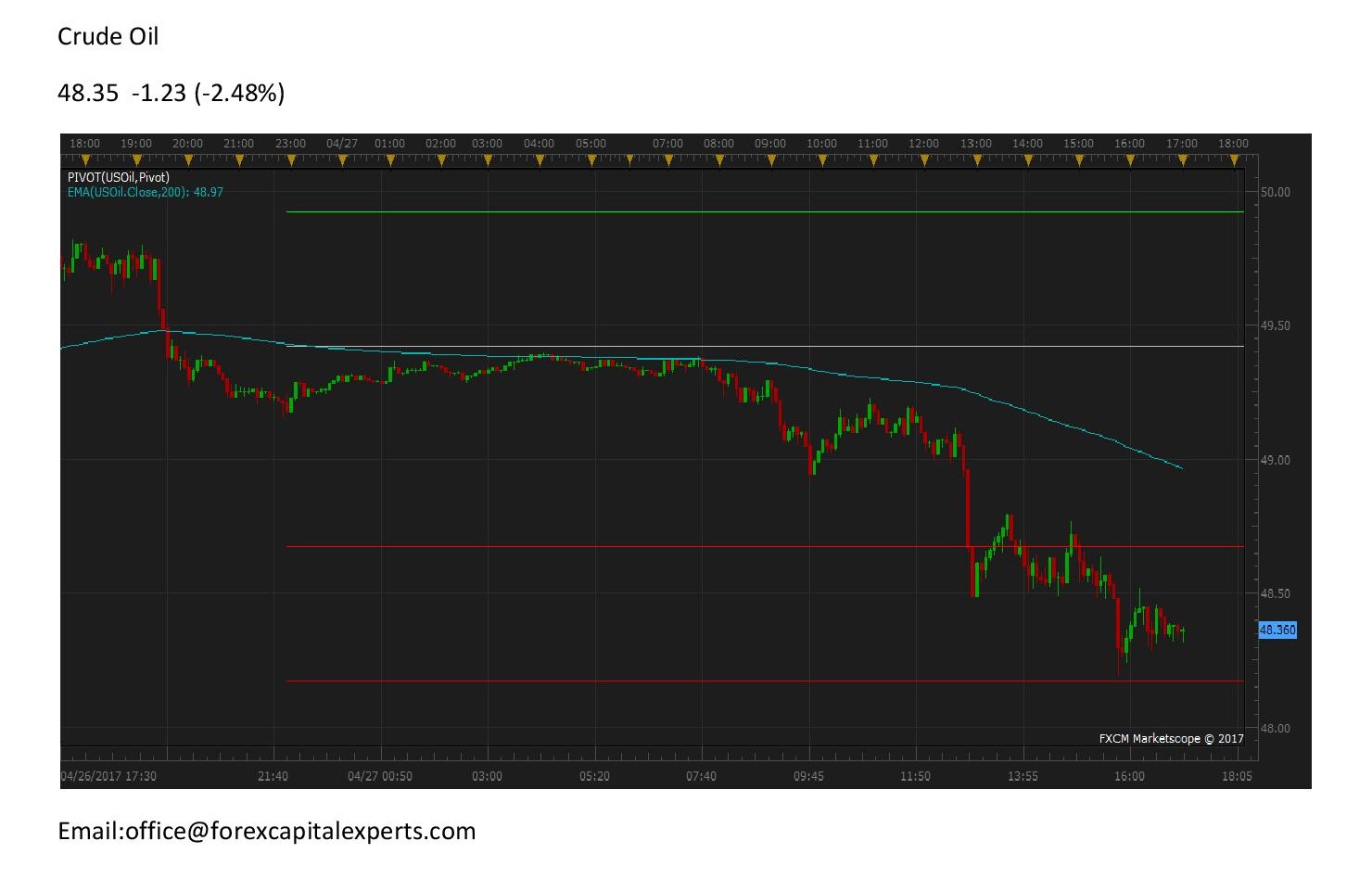 Bullish on Global Equities in 2017?

U.S. equities got off to a strong start today. The Dow Jones industrial average rose more than 200 points, with Caterpillar contributing the most gains .
The S&P 500 advanced 0.5 percent, with financials and materials rising more than 1 percent to lead advancers and Nasdaq Composite Index topped 6,000 for the first time. Stocks in Europe and emerging markets climbed, as risk appetite fueled by the outcome of France’s election continued.

Some of the firms that posted quarterly results before the bell: 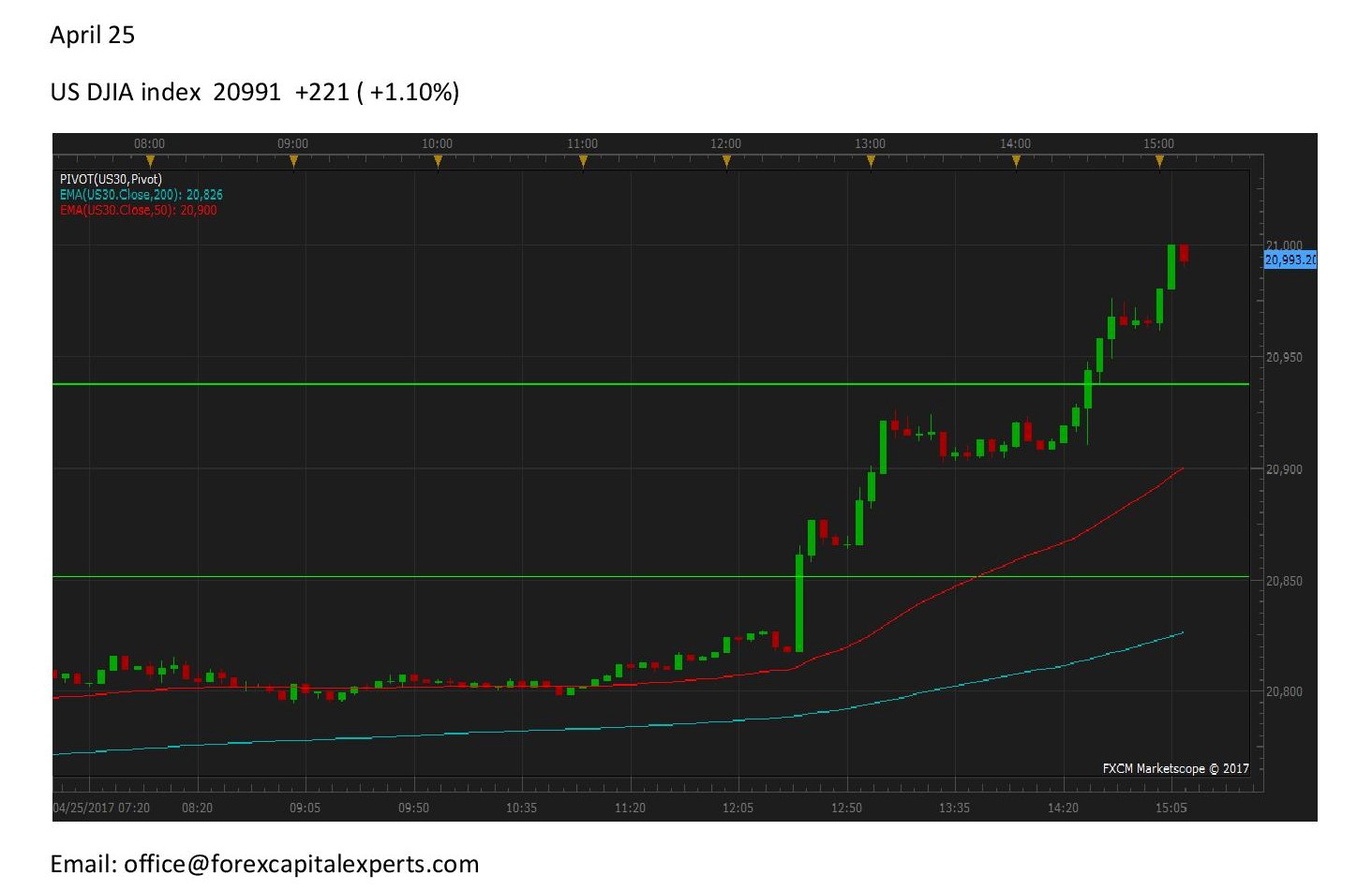 Euro survives after first round of France's presidential election

The euro reached a five-and-a-half month high against the US dollar when markets opened Sunday evening as exit polls in the French presidential election.
This comes after exit polls showed the independent candidate Emmanuel Macron gathered most of the votes in the first round of the French election.
His candidate Marine Le Pen is placed second in the first vote. Macron and Le Pen will dispute the presidency on May 7, when the runoff vote takes place. According to some financial analysts, the safe-haven bid should leave the U.S. Treasury market stabilizing the top side in EUR/USD. 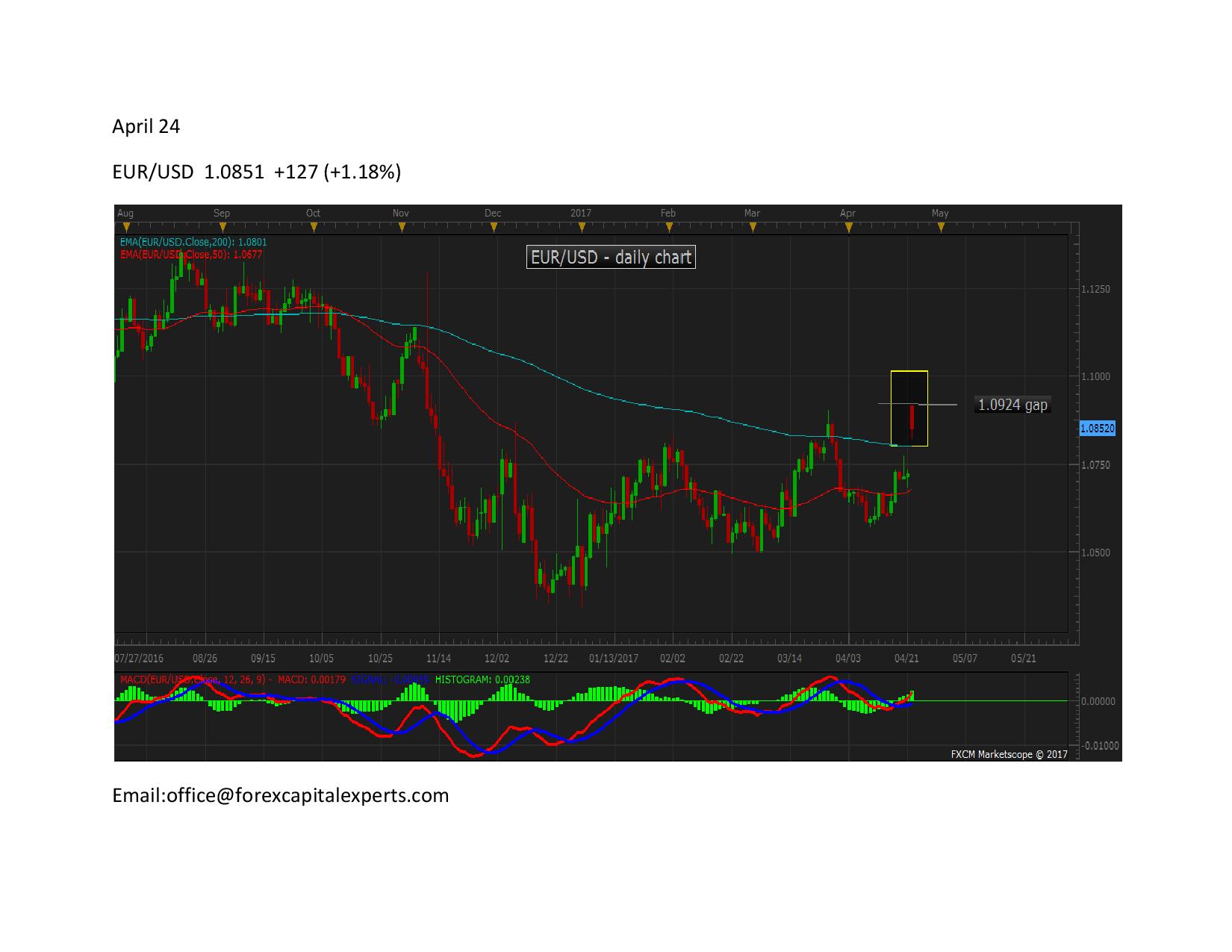 U.S. commercial crude inventories decreased by 1 million barrels from one week ago, falling to 532.3 million, according to the Energy Information Administration (EIA).

Total motor gasoline inventories increased by 1.5 million barrels last week and are now near the upper limit of the average range. Crude fell in the previous two sessions. According to the secretary-general of the OPEC, Mohammed Sanusi Barkindo, the group was committed to cutting inventories to the five-year average.

Many analysts warned that prices could quickly turn negative. OPEC and other producers agreed to cut output by almost 1.8 million barrels per day in the first half of 2017. 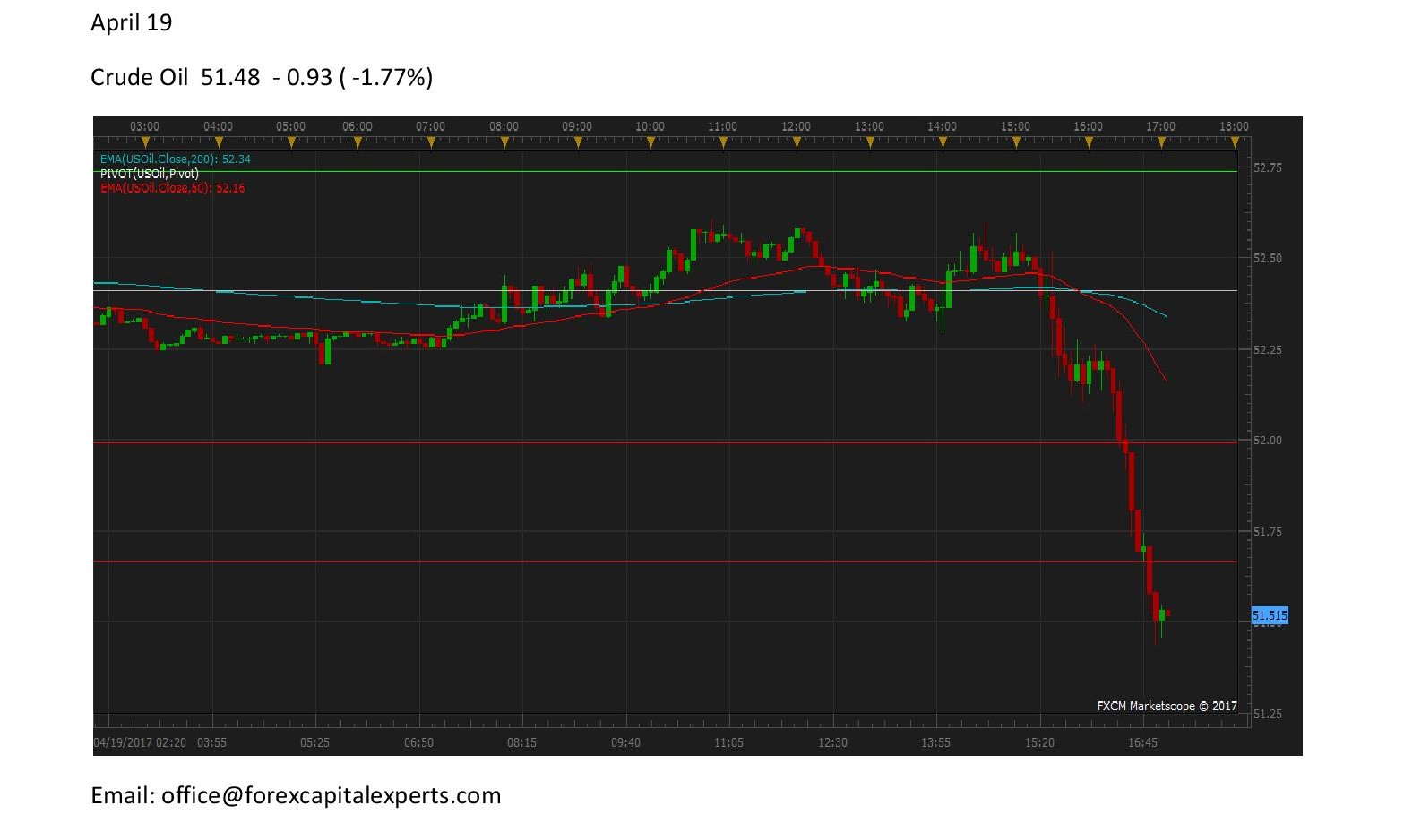 Theresa May calls for early election

British Prime Minister Theresa May called for an early general election as difficult Brexit negotiations get underway. According to her, the U.K. has a unique opportunity to form a unified government while the EU decides its negotiating position on Brexit. The early election is due to be held on June 8 but would a need a two-thirds majority by U.K. lawmakers before being made official.

A recent YouGov poll suggests that the governing Conservative party currently maintains the lead, garnering 44 percent of public support. The Labour party holds 23 percent and the Liberal Democrats trail behind with 12 percent. 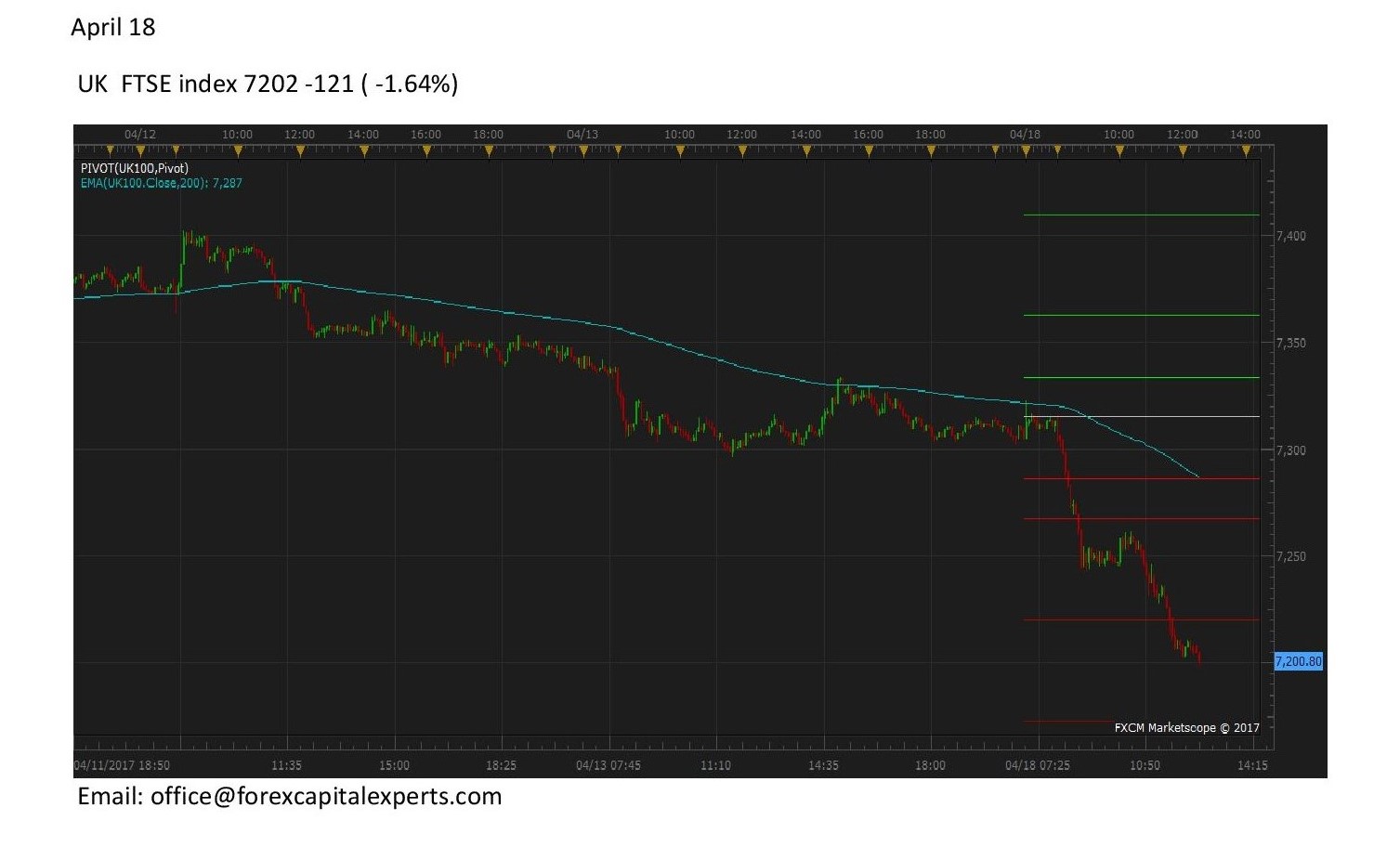